We awoke this morning to a beautiful snowfall.  Snow is lovely while it’s falling and it makes the trees and the fields around us pure white.  In one way, it covers up some ugly stuff, but underneath, nothing  much has changed.

That’s where the “Easter” part of this post becomes important.  If Christ is 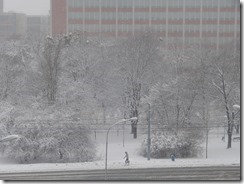 really risen from the dead, things have changed.  If what we say in the apostle’s creed is true – he was crucified, dead, and buried; he descended into hell; the third day he rose again from the dead – then something fundamental, mysterious, amazing has changed.  As long as men have walked the earth, death has been the inescapable fate of all.  Not only have we been cursed to wither and die physically, but we have been alienated from the only source of real life.  We’re twice dead – outwardly and inwardly.

The resurrection changes all of that.  Jesus experienced both kinds of death, and yet he lives.  And he promises that we will also live.  “I am the resurrection and the life; he who believes in Me will live even if he dies, and everyone who lives and believes in Me will never die. Do you believe this?”  If you do believe this, you have been changed, way down deep inside – not with a pretty covering, but by a gift of life that cannot be extinguished, even by death.

“Do not be afraid; I am the first and the last, and the living One; and I was dead, and behold, I am alive forevermore, and I have the keys of death and of Hades.”

Posted by Johnny and Annette at 10:04 AM No comments:

One part of Johnny’s new responsibilities on the Europe Leadership Team is to meet regularly with others on this team, including Ken Matlack, Johnny’s boss. More often than not the meeting happens over Skype as all nine of the team members try to stay connected (Skype gives them a lot of trouble!) They try to meet “face to face” to develop community, relationships and support for one another. The members then seek to bring that faith community to the MTW missionaries throughout Europe as they seek to serve, pray for and support them.

﻿﻿﻿
Recently we had the joy of meeting with the ELT team face to face—for real in Berlin. We experienced sweet times of conversation, great food, and especially wonderful times of worship together. Thanks Ken and David!)
We did not have a lot of time for sightseeing, even though Berlin is full of wonderful things to see and do. The train station we arrived at was only a block from one of the larger pieces of the Berlin Wall, so we were able to catch a glimpse of it. Unfortunately, on that outing I did not have our camera, only my phone, so photos are sketchy at best.

Posted by Johnny and Annette at 10:15 AM No comments: