Wow! It is hard to believe that the second week of English Camp is drawing to a close. The days of camp are always so full. We are up every morning by 6:00. Team devotionals are held at 7:15, they are a sweet time of singing and praying together. It is always a joy to have some of our Czech friends join us for this time together. It is hard to imagine what it would be like to only have Christian fellowship during one week in the year. It causes my heart to rejoice when I see that they come, listen and watch attentively. How we pray that God will cause them to see the light of Christ through words and actions.


It is hard, once again to think of these dear friends driving off. I gather that it is just as difficult for them. As we began packing up today, many asked, “Are you leaving now?” Often on Saturday morning, many linger until the last moment, before saying not good-bye, but see you next year or see you later. It seems that this year I came thinking about the long conversations I would be able to have with so many, and yet here on this last day of camp I am wondering where all the time for those conversations went. Fleeting are the moments.

The Lord has been at work here. Hearts have been softened toward the gospel. Those who are hurting, broken, full of sorrow and pain have been encouraged, strengthened and helped through the ministry of camp. One of the sweetest things that happened last week at camp was that on Friday evening after all of the closing activities, skits, songs and acknowledgments one of the struggling campers asked us to sing “In Christ Alone.” It was the absolutely best way to close out a week of camp with our dear friends. 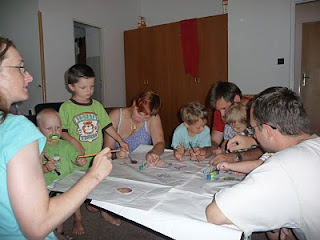 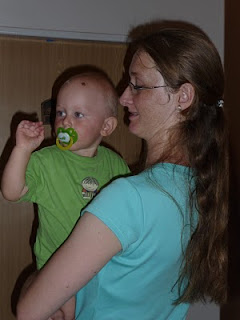 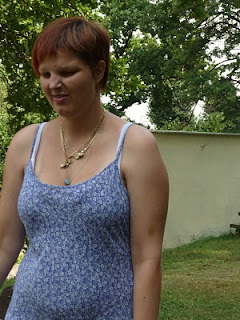 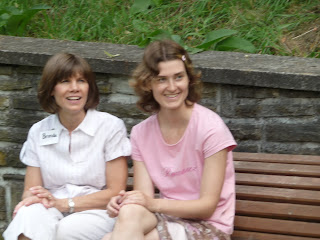 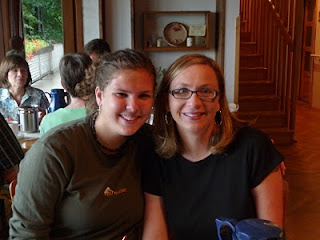 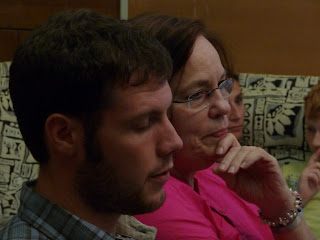 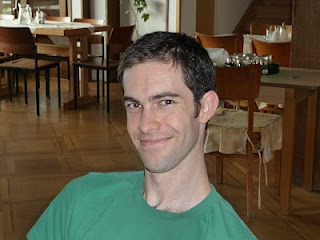 Posted by Johnny and Annette at 4:12 PM No comments: 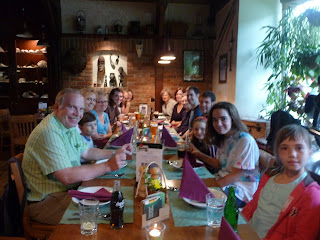 This week's team is made up of folks from several different churches~
David and Stacy and their daughters,
Eric and Denisa and their children are from North Shore in Chattanooga.
Dean, Leigh and Tina from StoneBridge in Charlotte,
Sandy from King's Chapel in Carrollton,
Pattie, Ruth, Jared and Robbie from our home church Faith in Birmingham.
It is a blessing to pray and worship with them as we see their labor of love for our dear Czech friends.
We can tell you guys are praying for us! We are excited to wake up on Monday morning!! We have had several encouraging discussions with the campers who are attending the second week of camp. Many of the campers who are here this week have been attending MTW-sponsored English camps for eight or nine years. Some of them have made a lot of progress toward Christ. The most amazing thing to us (and to the Czechs as well) is the transparency and love that characterize the conversations.
Last night, we had a two hour discussion of forgiveness and the problem of evil. Even though our opinions about these things differed sharply, the discussion concluded with expressions of respect and concern for everyone. This morning, Johnny greeted one man who had brought some of the most difficult questions into the discussion last night; he expressed great delight in the openness and respect he was shown. We think he is seeking answers to some of life’s most troubling issues – and that he purposefully came to this Christian sponsored camp to continue his search.
It is such a privilege for us to be able to be your hands and feet.
Posted by Johnny and Annette at 10:30 AM No comments:

It is hard to believe that it is Friday already. The shortest week of the year made up of the longest days of the year is now drawing to a close. It has been wonderful, challenging and heart rending. We are thankful for God’s great and all sufficient grace and His Spirit which have permeated our time with our dear friends. (Thank you so much for praying.)


Once again, Johnny and I spent the week teaching the little ones, the 2’s and 3’s. It seems most of our time was spent simply keeping them happy. Vendi, our dear friend helped to teach, entertain and translate. It all would have been impossible with her. This evening for the evening program we will be singing our song, The Wheels on the Bus. The parents will be singing and children watching. Our best student was a little girl who would often repeat everything.

We are so thankful for Alan’s talks each evening. They have been sweet soul food. After his first evening talk on finding rest for our souls, one lady asked us “How can I find this rest?” Please pray with us that she will find it soon. Another dear Christian friend told us during camp that she has cancer. Please ask the Lord to bring healing.

Thank you to all who have so faithfully prayed. We know the Lord was present in this camp.
Posted by Johnny and Annette at 5:28 PM No comments: