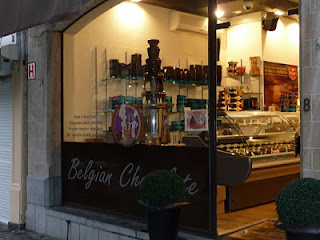 
If Europe has a capital, it's probably Brussels. NATO and EU headquarters are here. There are more ambassadors and journalists in Brussels than in Washington DC! 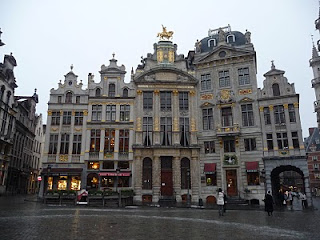 The Grand Place, a large square in Brussels 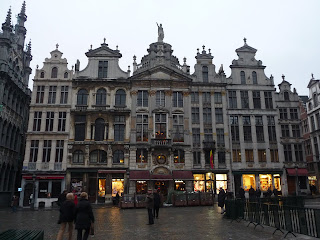 About 60% of the population of Brussels is non-Belgian. There are people here from all over the world. To add to their multi-cultural confusion, the native Belgians are divided into two ethic groups: the Walloons (French speakers, but not French) and the Flemish (Dutch speakers, but not Dutch). Furthering the difficulty, the nation is divided into three parts: the Brussels-Capital Region, Wallonia, and the Flemish Region.  Someone has rightly said that Belgium is not a country, but a compromise. 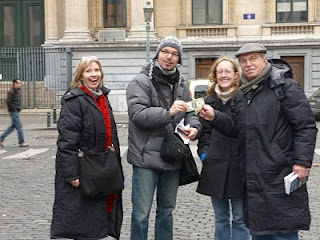 Team mates working on our project - we won, by the way, surprisingly.
Since arriving in Brussels, we have talked to Turks, Algerians, Koreans, Scots, Ugandan, Brazilians, and others. One of the first challenges that the MTW staff gave us was to gather enough information to create and present an introduction to Brussels. We scattered across the city in search of demographic, historical, and cultural information, we also had to find and interview Muslims and Christians.
Some of the more interesting things we found: The first recorded ruler of the region was a guy named Clovis in the 4th century AD (probably no relation to Clovis Ledbetter from Amite County, Mississippi once made famous by Jerry Clower). Brussels is widely known for its waffles, and this is well-deserved reputation, the ones we sampled were absolutely the best we have ever put in our mouths. Ditto on the chocolates. Muslims here are very friendly and approachable. One young man, whom we will call Hakim, told us that he had been raised in a Muslim family, but had walked away from his parents' faith during his years in a Roman Catholic school. He now believes in "spirituality". 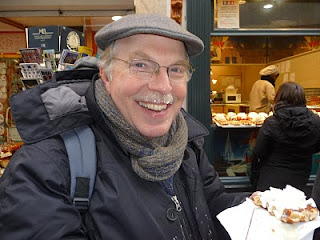 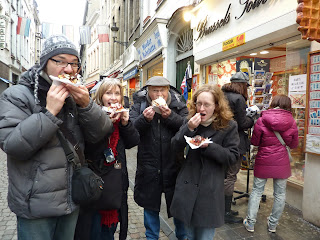 Thanks for continuing to pray for us!
Posted by Johnny and Annette at 9:24 PM No comments:

The past few days have been very rewarding, but very hectic.  Among the many exciting things that have happened since our arrival in Belgium is the news that we are now renters in Zlin.  We had originally hoped that we would be able to travel to Zlin at the end of our training time in Brussels to seek for a place to live.  Due to the commitments we have made to attend missions conferences in late February, the trip to Zlin was cancelled.  This didn't stop the Lord from finding a place for us to live.

During the Christmas holidays, the Andersons (some of our teammates in the Czech Republic) sent us some pictures of an apartment that they thought would be suitable for us.  We thought and prayed about it, and we came to the conclusion that we would be very satisfied with the apartment; but we thought there was plenty of time before we needed to commit.  The day after we arrived in Brussels, the Andersons wrote us that we had to make a commitment on the apartment immediately since the owner was about to rent it to someone else.  With a lump in our throats we agreed that we were ready.  The lump came, in large part, from the fact that this commitment makes our move a very concrete thing.  We're leasing an apartment in a foreign country; now we really are going to live there.

The apartment is located very close to the city center of Zlin. We will be within a mile of the Church and the language school. We hope to be able to walk as much as possible. The university is several blocks away and there is lots of green space nearby. We think it is in a great location for ministry.

It takes our breath away--all that God has done to bring us to this point. Thank you dear friends for all you have done through your prayers and support to make this happen. May our constant cry together be amazing, amazing, amazing God! 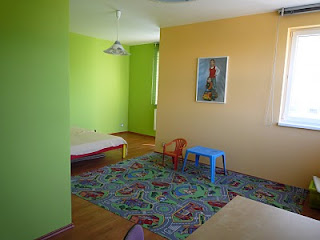 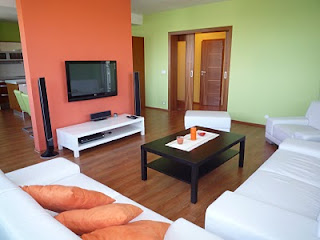 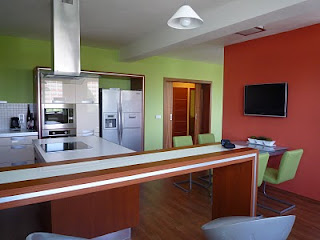 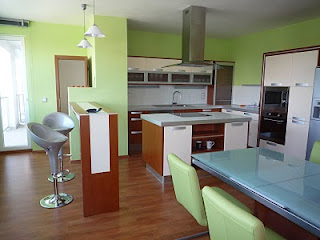 Another View of Our Kitchen

Posted by Johnny and Annette at 5:13 PM 4 comments: 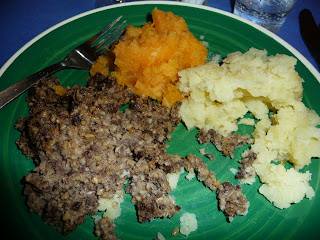 
We have been in Brussels for only five full days – and boy have they been full – but we have had many new experiences. Probably the most interetsing of all was the Robert Burns Memorial Supper we attended on Saturday evening. As part of our training here, we have been assigned to work with several different churches in the Brussels metro area. We were assigned to a Church of Scotland in the Louise area of south Brussels. The pastor asked us to help prepare the vegetables and serve the meal. The supper is a fundraising event for the church – one of their largest in the whole year. The funds this year will be sent to Haiti for earthquake relief.

So, we spent an enjoyable evening with the members of the congregation peeling and chopping potatoes and turnips; these are transmogrified into “bashit neeps and champit tatties” before the supper starts. The following evening, we served tables and were allowed to partake in the supper. The opening prayer, called the Selkirk grace was:

Some ha’e meat and cannot eat,

Some can eat that want it;

Sae let the Lord be thankit!

The “main event”, as well as the main course, was the haggis. When the cook declares that the haggis is ready, a bagpiper plays and leads a procession around the room. A Scot recites Robert Burns “Ode to a Haggis” and stabs the haggis with a sharp knife. Then the haggis is toasted with “a drap o’ the Cratur”. Speeches are given that memorialize Mr. Burns and his poetry; the lassies are toasted, the laddies are toasted, and several of Burn’s songs are sung. A rousing version of “Auld Lang Syne” caps off the event. 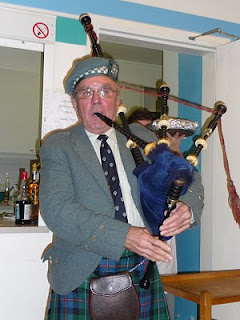 The piper, leading the haggis parade 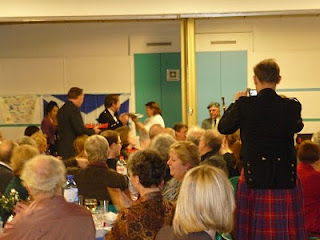 The Address to the Haggis

Thanks for praying for us. We are being stretched and challenged in some very good ways. We will need all the tools we can get our hands on to tackle the mission God has given us.

Posted by Johnny and Annette at 11:16 PM No comments:

We are here! A little bedraggled, well may be not, since we did not really have a bed. The trip was mostly uneventful with arrival this morning at about 8:30. It was dark. We are staying about 10 minutes from the airport, in a hostel called Operation Mobilization. (Their main purpose is to house and feed groups that are being trained for missions.) We took a walk this afternoon into the small village. Our new puffy down coats were great! We were almost toasty.

We have been told that today and tomorrow will be somewhat easy days, but the days following will be packed. We will be given the schedule tomorrow. 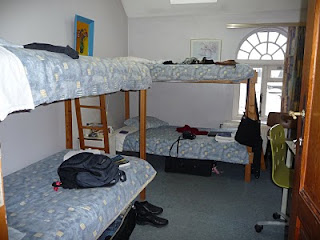 Our New Living Space for the Month 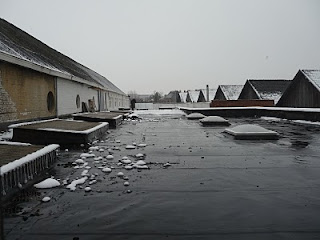 The View from Our Room 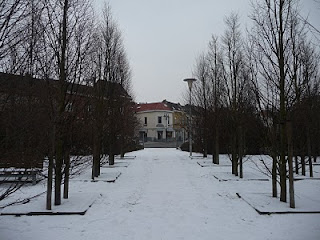 Just Down the Street

Posted by Johnny and Annette at 5:22 PM

We are Off! Well, Almost.

Well, we are off, sort of. The bags are packed . . . and unpacked . . . and packed again as we went through the check in process. We sort of wondered why we bothered to get dressed before we arrived, but, oh well. We are now sitting in the Birmingham airport waiting for our plane to Atlanta and then on to Brussels.


As we are set to leave our hearts are swelling, full of emotion, and our eyes fill with tears at the thought of you. We feel so loved and blessed by you. Thank you for the many prayers and notes of love and encouragement you have sent. We are overwhelmed. In you we see the true love and beauty of the Church displayed. John wrote to saying that we should love one another. You have loved us well. We are so blessed that you would love us and support this call of God upon our lives through your prayers and gifts.

Oh, that we could take every one of you with us. That would be our joy! In a very real sense, we are taking you with us. Paul said that he and his supporters were workers together for the joy of the church; and so we, through you, have been given the privilege of working with you for your eternal joy.

Thank you for giving us the joy of going. In a very real sense our hearts break at the going and yet at the same time we are filled with the hope and anticipation of all that we look forward to seeing God do in the days, weeks and years ahead - all to the praise of His glorious grace and our (yours and ours) great joy.
Posted by Johnny and Annette at 6:45 PM