We just returned from our second church retreat.  Since there was a Czech national holiday on Thursday of last week, many of our church members had the opportunity to spend an extra-long weekend together.  The fellowship was awesome! 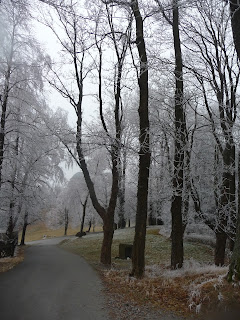 We were also introduced to a Czech filmed titled “Občanský průkaz“, or “Citizen’s identity card”.  It told the story of four Czech families living in communist-controlled Prague in the waning days of the USSR.  Our Czech friends wanted us to see this film because they believe it accurately depicts the conditions under which Czechs lived at that time.  It would be difficult to survive such a depressing environment and remain unscathed.  Sadly, many were deeply affected and the wounds are not yet fully healed. 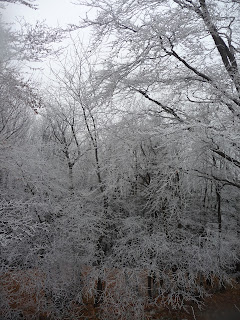 We went on a couple of hikes to the nearby Catholic pilgrimage site on Hostýn hill.  The hoar frost on the trees there was truly beautiful; some pictures are included in this post.
We enjoyed several wonderful times of singing, praying, and studying together; and we returned very much refreshed.
Posted by Johnny and Annette at 1:44 PM No comments: 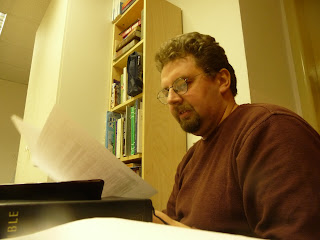 One of the doors God seems to be opening for us here is the opportunity to help develop and teach a small part of a training program for Czech church leaders.  We will be working with the Czech Republic branch of Martin Bucer Seminary and an evangelical church near Prague to create and test an on-site, Czech language program that will include courses in theology, Bible, and counseling. Mentoring will be an integral component of the program, too, and the participants will be challenged to find other men to mentor during the time they are active in the program. 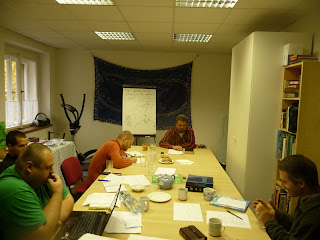 The men from the evangelical church are currently serving as elders.  They are aware that they are also the “guinea pigs” for the first trial of the training program.  On Friday, Johnny traveled with René Drápala to a small village near Prague to begin the work.  Veteran missionary Marshall Brown is also a leader in the development and testing; he and his wife  hosted the entire group (pictures nearby).


It was a delight to spend time with these men, both in the classroom and just sitting around the kitchen table talking about life.  It is a privilege to be involved in such a needed work.  Please pray with us that we will be guided as we seek to develop the curriculum and as we test the good ideas René and Marshall already have; and pray for these men that they and their church will grow, and as a result, God’s kingdom will grow and he will be honored.

Posted by Johnny and Annette at 5:06 PM No comments: